On Friday night we had friends over for our daughters 10th birthday.

We had baked potatoes with bolognaise sauce, coleslaw, grated cheese and sour cream.

They were delicious and everyone really enjoyed them, and they were so easy.

We had cooked potatoes and sauce left, which is great for the next day.

On Saturday night we had some more visitors and we were just going to have baked potatoes again but my oldest daughter suggested we should turn the left overs into a baked potato casserole.

This was a great idea. 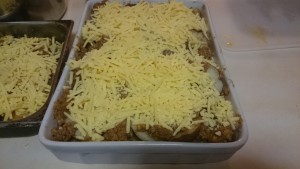 We sliced up the potatoes and layered it with the bolognaise. We covered the whole lot with grated cheese and baked it in a moderate oven for about an hour.

We served it again with the coleslaw and sour cream and was it delicious. 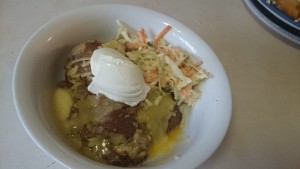 You may find me linked up with some of these great blogs.

We had some friends for dinner on Saturday night and we had a BBQ with salads.  Here in Victoria where we live, the evenings can get really chilly right through summer and it was chilly last night, so I made a delicious hot potato dish to serve with our meat and salads.

This is a dish you wouldn’t want to eat every night but for special occasions it is great.

Pre-boil potatoes, while potatoes are cooking cut up and fry the bacon and leeks together.

Cut potatoes in half or quarters and place in the casserole dish sprayed with olive oil spray.  Tip in the bacon and leeks when cooked and mix together a bit.

Pour over the cream and place cheese on top.  Bake in moderate oven until golden and brown – about 45 mins.

This was absolutely delicious and our guests really enjoyed it – I hope you do too. 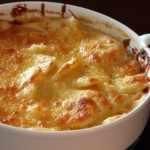 It’s vegetable planting time in our place of the world.  Spring came on the 1st September and the weather has really warmed up quickly.

We don’t usually plant tomatoes here until after the Melbourne Cup Race on the 1st Tuesday in November because we can still get frosts, but this year we are trying something different.

We planted 60 tomato plants today and plan to put them under plastic.

The paddock that we are planting these vegetables in was sown with peas  last year and after we harvested them we left it for the winter. In late winter we moved the pigs into the paddock and let them eat the grass and work over the root matter, which then fertilizes and aerates.  Graeme then ploughed the whole paddock with the tractor.

He then prepared the bed by rotary hoeing it and making raised beds, so that we can get a deeper top soil.  We then found drench drums and placed them between every second tomato plant and filled them with water.

We will run hothouse plastic over the top and make a sort of poly tunnel which is held up by the drench drums.  The theory is that the water will heat up in the drums during the day and then at night when the temperature drops the drums cool off a lot slower than the atmosphere does thus stopping a freeze happening around the drum (It is a cold framing idea that my husband found on u tube).

After they planted the tomatoes they planted about 40 kg of white potatoes.  My husband once again prepared the bed and raised it.  He then spread sheep manure down it and rotary hoed it in, then the children planted the potatoes – two rows per bed.  Finally everything was watered in.

This is just the beginning of our plantings.  In a month, once the chance of frosts has gone we will plant another 300 tomatoes.  At the moment we planted Grosse Lisse tomatoes but we will probably put in some Romas as well.  Next week we will finish planting the potatoes, another 10 kg of whites and then 50 kg of reds.  We haven’t really grown potatoes before with much success so we thought we’d give it another try this year.

We will also be planting zucchinis, corn, pumpkins, cucumbers, beetroot and carrots in another week or so.

I will keep you updated with more photos and information as we go.

What are you planting at this time of the year in your place in the world???