The vegetables are growing really well and I must admit to being very excited about it, both my husband and myself like just going out and watching it all.

Here are a few photos to update you on the progress, but here is a reminder of what it looked like before. 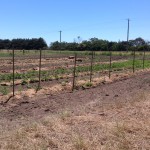 The first row is the first lot of tomatoes that we planted, they have been mulched (as stated in update 3) and have a length of mesh next to them to support them.  Some of these tomatoes even have flowers on them. 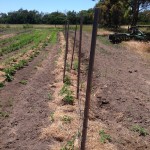 Next to the tomatoes are 3 rows of potatoes, the first row has been mulched down the middle with hay to prevent weeds growing up and to keep moisture in.

My husband is then going to go down each row of potatoes with a double sided mulboard plow which will turn the soil from the middle of the drain between the rows and put it up against the potato seedlings.  This plow is a tractor mounted implement. 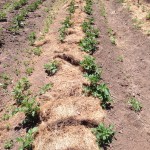 We haven’t mulched the others yet, but will probably do so in the next week.  We are amazed at how the potatoes are growing, we haven’t grown them like this before.  We have grown them in tyres in the past like this.

Here are the zucchinis that were planted last week, we also planted the same amount of cucumbers. 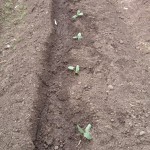 The corn is going great guns as well and there are heaps of pumpkins coming up amongst them too. 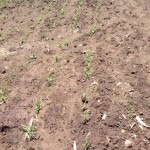 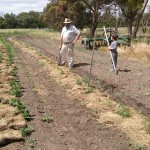 Here are the men staking up the tomatoes.  We planted another 3 rows of tomatoes and we have had some losses, maybe 20 or so but we are going to replant them over the weekend.

The weather has been great for growing vegetables, we have had rain and then some clear sunny days – just perfect.

I don’t think we will have our own tomatoes by Christmas, but that’s ok, if everything keeps growing like it is it won’t be too much longer.

God is really blessing our vegetables and us, thank you Lord.

What’s up in your garden this week???