One of my favourite movies is “Fiddler on the Roof“. I love the music and the story, until the end when they are cast away from their homes.

Tevye’s first song is “Traditions” in which he sings about the way it is and how things have been done the same way for a long time, why change, this is how it works and  as far as they are concerned it works well.

Then he is faced with challenges concerning his traditions, that being the marriage of his 3 eldest daughters .  The first one pledging herself to her intended (a poor tailor instead of a wealthy man) without the “Papas” approval.

The second one marrying a new ideas educated Jew who was fighting for the rights and freedom of the Jews in Russia.  They told the “Papa” they were marrying without his permission  – another break in tradition.

Then there was the 3rd daughter who ended up marrying a man who wasn’t a Jew behind her “Papas ” back and was excommunicated from her family and her friends, it was as if she had died.

You can see how with each daughters marriage the “Papa” bent just a little bit and then a little bit more, he struggled with the traditions of his faith and his cultural ways.

What traditions do we carry out because it has been done that way for years?

Maybe it’s attending the same church because our family does. Maybe it’s just attending because it’s a family tradition not because of a living faith.

Maybe you send your kids to a certain school or college because it’s the place where so many family members have attended or maybe you don’t eat red meat on Fridays. There are so many things we do out of tradition, without questioning,

I have been doing a lot of thinking on this topic lately and I think some family traditions are great, daily devotions, meal times together, teaching our children about God and encouraging their own relationship with our Lord.

I also think that we should continually challenge ourselves on our faith and our lives to make sure we are truly connected to God and His leading in our lives, not just living out of our families traditions or our own, and as it says in Philippians 2:12 let us work out our own salvation with fear and trembling.

Philippians 2:12 Wherefore, my beloved, as ye have always obeyed, not as in my presence only, but now much more in my absence, work out your own salvation with fear and trembling.

Proverbs 16:9 A man’s heart deviseth his way: but the LORD directeth his steps.

Romans 12:2  And be not conformed to this world: but be ye transformed by the renewing of your mind, that ye may prove what [is] that good, and acceptable, and perfect, will of God.

You will find me linked up at some of these great blogs.

We are back to planting vegetables and my husband took the day off work so he and the children could get them done.

The children finished planting the potatoes, so we have nearly 90 kg planted, half whites and half reds. 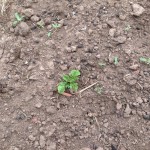 Here’s a picture of the first potatoes coming up.  This  is very exciting!! 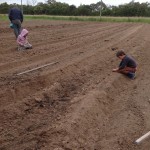 Here are the gang planting the potatoes.  The children did a fantastic job and saved their father and myself from doing it.  We are trying to teach them diligence and consistency when they work. 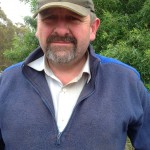 Here’s a picture of my very handsome husband after he had finished laying out the potatoes for the children to plant.

After they finished planting the potatoes, No 2 son and his father planted pumpkin and corn seeds.  The pumpkin they planted with the corn was Jarrahdale and then they also planted peas with Queensland Blue Pumpkins amoungst them.

We have been buying our seeds from a bulk supplier so we have enough for a few years and it is more cost effective this way.  This year we bought 15,000 corn seeds (this was the smallest amount we could get), this should last a little bit!!!

I just asked my husband why they planted the corn and pumpkin together in rows.  His answer was very technical and might take up a bit of room, but here goes:

We got some cucumber seedlings from our local nursery and planted them in an area that was heavily manured. 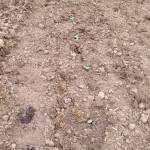 You can just see the green of the cucumbers in this photo. They are apple and continental. The manure comes from our feedlot pen where we had been keeping our pigs and cattle over the winter. They were bedded down on hay so now it is ready to be dug out and hoed into the beds,

This is the tool that my husband uses for planting seeds.  You put the seeds in the hopper on top and then there is a plate in there that has holes big enough for the specific seed to go through.  There are a number of different plates for different sized seeds eg: carrots. Then you push this along the bed and it places the seed on the ground and then covers it over and rolls it down.  This is very handy and saves a lot of back breaking work.

The tomatoes that we first planted are going quite well, but we didn’t get the plastic on as it had holes in it, so we put preserving jars over them.  Now as the weather is warming up we took them off and they look good.  We did loose a few though but this happens.

So that’s our latest vegetable news for now, will post more photos once everything starts coming up.

Blessings to you all.

What are you up to in your garden, is it winter or spring??? 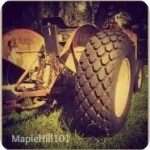 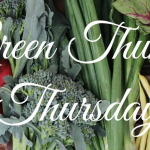