Earlier this year my No 1 son asked me to cut his hair.  I have been doing this on and off for a couple of years, but not often enough that I remember which clippers are the best ones to use.

We got all the clippers out and onto the back verandah and got ourselves set up.  I was in a bit of a rush because it was getting late and I like to cut hair just before we have tea so that we can have showers and clean up and not be all itchy. 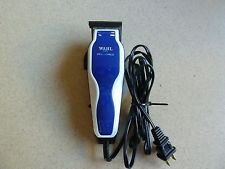 My son normally has a clipper cut now as he is a shearer and it can get really hot in the sheds.

So off we go, I get the clippers plugged in and start on the back, as I have had bad experiences and I want to make sure the clippers are working.

Now the clippers weren’t working properly so we fiddled with them a bit and kept going.  After a bit of frustration I grabbed the little clippers that we have and started with them and it was going quite well but because his hair was longer than normal the clipper head was getting clogged.

As I put those clippers down I accidently pushed in the cutting head and changed the setting, without noticing.  I got the other ones, but they still wouldn’t work, frustration is now building and it is getting darker so I grab the other head (that I had pushed in) and went straight over the top of my sons head.

All of a sudden I realised that the head had been pushed in and I had almost shaved a strip on his head.  There was a little bit of stubble there but not much.

Well, I was very upset (to say the least) and very sorry, but my son just said  “oh Mum don’t worry, it’ll be alright”.

I had no choice now but to keep going and the more I cut the worse I felt.

Now he had to put up with a fair bit of ribbing and questioning, and all he answered them was “I’m built for speed”.

He didn’t say once that his mother had stuffed up and shaved his head.  He never made me look bad to anybody and now says he wants me to cut it again.  (You can imagine I am slightly hesitant to do so).

Now to the point of telling you all this:

But the most important lesson is to remember to forgive myself, I think I struggled with that the most.  I really have trouble forgiving myself when I do things wrong or make mistakes.

Now I know that God forgives me and I know that my son had too so what is so hard about forgiving myself and moving on.

1 John 1:9 If we confess our sins, he is faithful and just to forgive us our sins, and to cleanse us from all unrighteousness.

Ephesians 4:32 And be ye kind one to another, tenderhearted, forgiving one another, even as God for Christ’s sake hath forgiven you.

Romans 8:1 Therefore, there is now no condemnation for those who are in Christ Jesus.

Sometimes there are ramifications for the things that we do, sometimes to us and sometimes to others.  In my sons case I felt big time guilt, but he was the one who had to walk around with an almost shaved head.

Now I must focus on the fact that I am forgiven and learn from my mistakes and move on, and stand forgiven and renewed to live (or cut hair) another day.

Do you have trouble forgiving yourself?? What scriptures do you turn to for help??

With Christmas fast approaching I’m always on the look out for different fruit cake ideas.

I usually make the normal cake in a square tin and give these as gifts, this year I’ve thought of a different idea.

Mini Fruit Cake Muffins.  As I stated before I bought these really cool red mini muffin pans and they are great.  Muffins come out bite size and don’t stick – excellent. 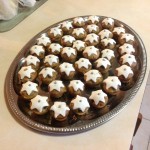 Place the above ingredients in a large saucepan and bring to the boil. Simmer gently for 3 minutes and then remove from the heat and allow to cool.

Add the above ingredients and mix well.

Sift the above ingredients together and fold into the cake mixture.

Grease the muffin pan and fill with mixture.  Bake in a moderate oven for 10 mins.

I topped mine with royal icing cut into star shapes and then put a silver sugar bead on top. 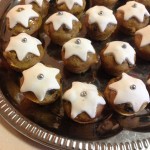 PS:  You can make these in a normal size muffin pan – just increase the cooking time by approximately 5 minutes.

I have been wanting to make  soap for a couple of weeks now and I have been hesitating for probably no particular reason.  Maybe I was a bit hesitant about the lye ingredient and using it.

I made soap about 10 years ago from rendered fat and it was great and we really liked using it.

So I have finally done it.  I have two tubes and one small ice cream container sitting on the bench ready to open tomorrow night, and guess what??? it wasn’t that hard at all.

I bought some fat from the butcher this time (next time I will render our own from our steer we are butchering in a weeks time).  It cost me all of nothing and rendered really well and looks just great.

Here is the recipe ingredients:

This is it three simple ingredients for a basic soap.

First of all mix the Lye with the water.

BE VERY CAREFUL DOING THIS:  Always add the lye to the water not the other way around.  Keep your nose away because it will fume and get quite hot.

Place lye/water mixture aside and let cool to 100 degrees F.

Melt fat in saucepan and then place into your mixing bowl.  I used a ceramic one.

Bring your fat temperature to around 80 degrees F or room temperature.

When mixtures are at the right temperature carefully pour lye mixture into fat.

Stir mixture with a stainless steel spoon and then use a stick blender in 20 second bursts.  Stir with blender between.  You would probably blend 3 times.  I did 4 and I think I slightly over did it.

When mixture is at trace stage (when you see lines of mixture sitting on top).  I was so busy trying to mix it and get it right that I forgot to take photos of this stage.

I used some tubing that my husband had left over from the aquaponics set up. 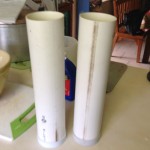 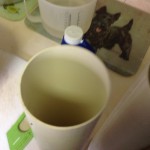 I put cling wrap on the bottom before putting the caps on.  Then after pouring it in I placed both tubes in a bucket and wrapped a towel around them.

After 24 hours slide the soap out of the tube and slice in to soaps at whatever thickness you desire. 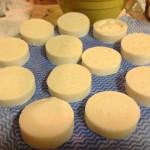 Leave soap on a rack to dry and age for 3 weeks.

I doubled the recipe and filled both moulds and put the extra bit into an ice cream container lined with cling wrap.  I then wrapped this container in a bath towel.

I had trouble getting the soap out of the long pipe moulds but Graeme came to the rescue and poured boiling water along them until they came loose.  This didn’t affect the soap at all.

This is the You tube clip that I watched before making the soap.  Becky really explains it well.

These yo yo biscuits are a family favourite and I usually make them each Christmas to eat and for gifts. 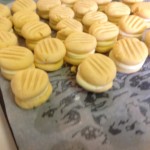 This year is no different so I thought I share the recipe with you all. 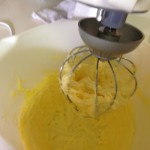 Beat butter and sugar together until combined. 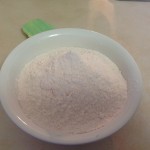 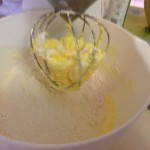 Mix together carefully -if you put the mixer on too high all the flour will fly out – I learnt this from experience. 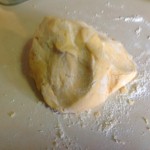 Turn out onto a floured bench and knead lightly until smooth.

Roll into balls of equal size and place on a tray covered with baking paper.  Press lightly with a fork.

Bake in a moderate oven about 10 mins. 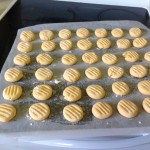 Place soft butter, icing mix and vanilla essence into mixer and mix, keep adding icing sugar until it is the right consistency.

Pipe icing onto biscuits and join together. 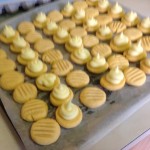 Make sure your butter is a bit soft, but not melted.  If you use melted butter the biscuits wont be as nice.

The icing needs to be quite stiff but still soft enough to put through your piping bag.

I pipe the icing on because I need to do this, but you can just spread it on if you like.

This tastes as great as it sounds, creamy and delicious.  You can use any fruit you like in this but pineapple is my husbands favourite and it is a really great flavour combination. 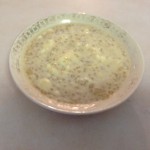 Place water in a saucepan with tapioca and cook until clear.

Add the butter and stir until melted.

Mix together the sugar, beaten eggs, brown sugar, cold water and vanilla, then add this mixture to the tapioca when it has cooled slightly  (add it when it is hot and the egg will cook in it).

When cool add about 2 cups whipped cream and stir until combined then add crushed pineapple.

This is best if refrigerated before serving.

PS:  I can never get the tapioca totally clear when it is cooked, it still has some whiteness to it and is still great.

These just sound so yummy don’t they, and they actually taste great too. 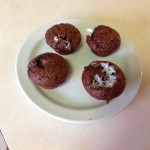 In a bowl combine, flour, sugar and cocoa powder.  Soften peanut butter and add to the mixture with the olive oil and the water. Mix until combined. 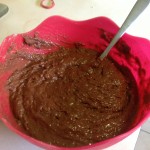 Half fill the muffin tins and place marshmallow in the centre and top with more mixture. 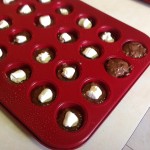 Bake in a moderate oven for approximately 10 – 15 mins.  Cool on wire rack.

I bought these really nice muffin tins (see above) yesterday and used them.  They are only small ones so this mixture made quite a few. Normally this mixture makes 24 normal sized muffins.

Because I used small muffin tins I cut the marshmallows in half.  If I would have used the normal size I would leave them whole.

Just a warning, the marshmallow can come out during cooking and this can make them a bit sticky to eat, but they still taste great.

Here are some I made without the marshmallow, they tasted good too, and just the right size for a mouthful. 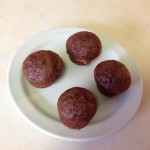